It feels surreal that we’re now living in 2020. Just imagine, the last two decades brought us e-commerce, social media, Airbnbs, and yoga pants. While I doubt that Judgement Day will ever happen, it’s hard to predict what will await us in the next decade. Maybe VR will replace office commutes. Maybe we’ll find a cure for Alzheimer’s, or global warming might wipe out half our planet. Who knows? It’s the limitless possibilities that make the idea of time travel so alluring to writers and readers alike. Time travel books allow us to explore fantastical futures and pasts.

1. Ocean of Minutes by Thea Lim 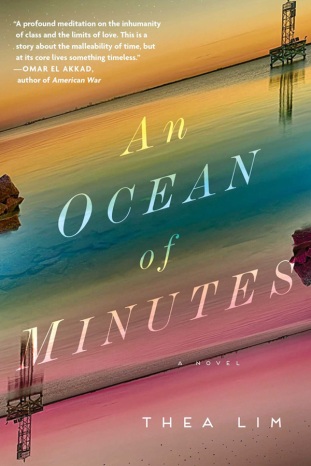 The year is 1981 and America is ravaged by a deadly flu pandemic. When her boyfriend Frank becomes infected, Polly enters a radical contract with TimeRaiser, a company that sends people on a one-way-trip into the future to work as bonded laborers in exchange for medical treatment for their infected loved ones. Polly promises to meet Frank in Texas, where she is set to arrive in the next twelve years. But when she is re-routed five extra years in the future, Frank is nowhere to be found. Alone in an unrecognizable and divided America with no status and money, Polly must navigate a new life and search for a way to reunite with Frank.

2. Here and Now and Then by Mike Chen

“Did a missing past even matter anymore compared to human touch in the here and now?”

Stranded in the 1990s after a botched time-traveling mission, Kin Stewart has learned to adjust to his new life as a loving husband and father to Miranda, his teenage daughter. His everyday family life is interrupted, however, when his “rescue” team arrives. Their mission is to return Kin to 2142 where he’s only been gone weeks, not 18 years, and where another family he doesn’t remember is waiting for him. When Kin’s efforts to stay connected to both families puts Miranda’s existence at risk, he is determined to make one last trip across time to save her, even if it means breaking every taboo of time-traveling.

3. How to Live Safely in a Science Fictional Universe by Charles Yu

“Life is, to some extent, an extended dialogue with your future self about how exactly you are going to let yourself down over the coming years.”

In this meta novel, our hero is Charles Yu, a time-travel technician who travels across Minor Universe 31 and fixes time machines of people who try to fix the past. Minor Universe 31 sits on the outskirts of science fiction where failed protagonists like Linus Skywalker and lonely sexbots. When Yu isn’t taking client calls, he visits his mother (who is stuck in a one-hour loop where she makes dinner over and over again) and searches for his missing father, the inventor of time travel. The key to finding his father may be found in a book that he got from his future self. It’s called How to Live Safely in a Science Fictional Universe, and he’s the author.

*We read Charles Yu’s novel for our December 2016 discussion. You can listen to the episode here. 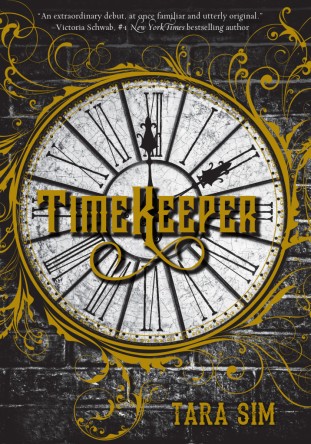 “There comes a moment when time seems to slip faster, running long then short, shadows shrinking as the sun climbs. It’s the moment, he decided, when you’re no longer a child. When the concept of time and the need for more of it come together and make you powerless. Make you yearn for the longer days, the lazy days, before you knew what time passing actually meant.”

Set in an alternate Victorian England where every town has a clock tower that regulates the local flow of time, Sim’s steampunk novel centers on Danny, a 17-year-old prodigy clock mechanic. Clock mechanics have an innate ability to feel the flow of time and are tasked with maintaining the country’s clock towers, as a damaged clock can fracture time and potentially stop it completely. Reeling from a near-fatal explosion and still grieving the loss of his father after he became trapped in a time-Stopped town, Danny is eager to excel at his new assignment. He goes to repair the seemingly sabotaged Colton Tower, where he meets and falls for a mysterious boy who turns out to not be human.

5. All You Need Is Kill written by Hiroshi Sakurazaka, illustrated by Yoshitoshi ABe

“They say people who die in dreams are supposed to live forever.”

When aliens called the “Mimics” invade Earth, Keiji Kiriya is just one of many new recruits shoved into a powerful exoskeleton and deployed onto the battlefield. Keiji dies after coming into contact with an unusual-looking Mimic, but he miraculously wakes up and discovers that he’s stuck in a time loop where he fights and dies over and over again. After several dozens of loops, Keiji connects with a fellow looper Rita Vrataski, who might hold the answer to escaping his loop and saving humanity.

If you’re getting deja vu from reading the premise, it’s because the light novel was adapted into the 2014 Hollywood film Edge of Tomorrow, which starred Tom Cruise and Emily Blunt.

6. The Girl from Everywhere by Heidi Heilig

“Paradise is a promise no god bothers to keep. There’s only now, and tomorrow nothing will be the same, whether we like it or not.”

Nix has spent her entire life aboard her father’s ship, sailing across the world and across time. As long as Nix’s father has a map to it, he can sail the ship to any time or place, real or imaginary, such as nineteenth-century China or the land from One Thousand and One Nights. But Nix’s father is obsessed with obtaining one particular map, one from 1868 Honolulu that could reunite him with Nix’s late mother. Nix is unsure what will happen if they succeed in finding the map. Will she cease to exist, or will she be able to find her own destiny?

“Each year, humanity died a little more. ChronoCom’s charter was to fight that decline, yet things had never gotten better.”

Chu’s novel is set in a future where humans have abandoned the toxic Earth and fled to the outer solar system for survival. Tightly controlled time travel is now the only way for humans to cling to their fragile existence. James Griffin-Mars is no hero, but he is one of the select and expendable few suited to be a chronman, who are tasked with the most dangerous job in history: traveling to Earth’s past to collect precious resources without altering the timeline. Most chronmen never reach old age due to the risks and stress of each time jump, and James is reaching his breaking point. On his final mission, James breaks the cardinal rule of time travel and rescues a young 21st-century scientist named Elise Kim from her fated death. By saving her life and returning to the future with her, James has condemned them to being fugitives. Their only hope of survival is to hide the poisonous and wild wastelands of Earth.

“My entire childhood has been a countdown to the day I receive my future memory. I spent so much time anticipating tomorrow—making plans, imagining scenarios, worrying endlessly—I’m not sure I know how to live in the present. I wouldn’t even know where to begin.”

Like every 17-year old in the nation of North Amerie, Callie is excited to receive her vision—a memory sent from the future that will sculpt each citizen into the person they’re meant to be. Most expect to see what career path they’ve taken, but Callie sees something horrifying. She sees herself stabbing her younger sister in the heart with a syringe. Before she can process what’s happening, the Future Memory Agency (FuMA) arrests her. Callie is able to escape with the help of her childhood crush, Logan, but to change her sister’s fate, she must first keep her future memory hidden from FuMA and the psychic-hunting Technology Research Agency.

“Maybe it’s impossible to live life without any regrets. Even when you know the future… you’ll still mess up.”

One morning, 16-year-old Takamiya Naho receives a letter from herself ten years in the future. At first, she is skeptical, but when the letter mentions a transfer student named Kakeru, who actually does end up in her class, Naho begins to believe in its contents. Her future self shares several regrets from her high school days and urges Naho to befriend Kakeru, insisting that she is the only one who can save him from a terrible future. Burdened with the knowledge that Kakeru won’t be with her and her friends ten years in the future, Naho struggles to make the perfect choices that will hopefully alter fate.

“Past and future are the same, and we cannot change either, only know them more fully.”

Finally, we have Ted Chiang’s second collection of short stories, which was named one of the best books of 2019 by several media outlets. The collection begins with “The Merchant and the Alchemist’s Gate,” which follows a fabric seller in ancient Baghdad who grapples with past mistakes and the temptation of second chances after discovering gates that allow one to converse with their past or future self.

In “Anxiety Is the Dizziness of Freedom,” people have “prisms” that allow them to communicate with alternate versions of themselves from parallel universes who made different choices at crucial life moments and are living with different consequences. While not all nine stories fall under the time travel and alternate realities subgenres, Chiang explores poignant themes like what does it mean to be human, what is free will, and how does technology shapes our perceptions.

Part of the Potluck Podcacst Collective